The Banana is dying out. The race is on to reinvent it before it's too late

The world’s most popular fruit is facing extinction, and scientists are racing to use gene-editing to save it. To succeed, they’ll need to overcome an even bigger problem: opposition to GMO crops.

In a lab just outside of Norwich, Ofir Meir, the CTO of Tropic Biosciences, is holding the future of the banana in his hand: row up upon row of greyish clusters of cells arranged in a Petri dish. It will be months before these clusters grow shoots and are ready to join the neat lines of plants, each no more than a couple of centimetres tall, growing inside test tubes. From there, a handful of specimens will make their way into the greenhouses on the other side of the research park. Meir, 40, raises his voice to be heard over the low thrum of the growth chambers keeping the plants at 28.3°C: “One day, these shoots will become a field in South America.”

Genetically speaking, the plants in Meir’s test tubes are almost identical to every other Cavendish plant on the planet. The difference comes down to a couple of genes. Meir’s bananas have been edited using CRISPR-Cas9, a DNA-editing molecule co-discovered in 2012 by geneticists Emmanuelle Charpentier and Jennifer Doudna. CRISPR can, with a few molecular snips, deactivate a gene within an organism. This technique allowed the browning-resistant mushrooms to sidestep the USDA’s GMO regulations.

“CRISPR is precise, it’s relatively easy to use, and it allows a young company like us to start doing real genetic editing,” says Gilad Gershon, Tropic’s CEO. Gershon, who founded the company in July 2016, was working for the Californian agricultural investment firm Pontifax AgTech when he became convinced that CRISPR was about to blow open the agricultural industry.

“This really marks a revolution for the industry,” says Gershon, 36. For decades, the field had been dominated by a handful of agrochemical firms – Monsanto, Syngenta, Bayer and DuPont – who channelled their GMO efforts into blockbuster crops like corn, soya, cotton and rape seed. “It was just so expensive – you needed to spend $100 million on them, so you were obliged to work on corn,” he says. “Now, when the costs are a fraction of that, the field of opportunities is much bigger.”

In an industry where margins are razor–thin, a small tweak to make a better banana could have huge implications. The tiny cell clusters in Meir’s Petri dish are embryogenic banana stem cells that have been edited to grow into full-sized plants with fruit that ripens more slowly than a typical Cavendish. When bananas ripen, they release a gas called ethene, which prompts other fruit to follow suit and ripen more quickly. One rogue yellow banana aboard a container ship can cause a chain reaction that may wreck as much as 15 per cent of a shipment. If Gershon can tweak the genomes of bananas so they ripen more slowly, it could stop millions of tonnes of bananas spoiling, and save exporters a fortune.

Yet slow-ripening bananas are just the prelude to Gershon’s plans. His firm is also using the gene-editing technique to create naturally-decaffeinated coffee and stop the flesh of bananas from browning so quickly. But the real prize for Gershon? TR4-resistant bananas.

A researcher walks in carrying a crate filled with large flasks. Meir picks one out. It is filled with a yellowish liquid and inside there are thousands of white clumps, swirling within the murky solution. This is CRISPR in action. Within that flask containing millions of banana cells, CRISPR molecules are being guided to specific parts of each cell’s DNA and cutting out genes. “You want to take one cell and deliver the machinery to that one cell,” Meir says. “Then, the goal is to generate this cell into a full banana plant.” 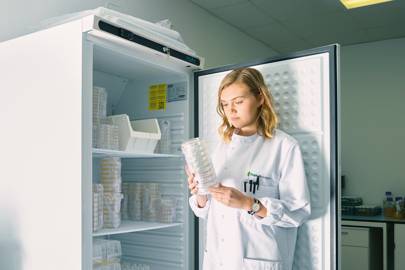 But CRISPR doesn’t edit every cell it comes into contact with, so the challenge is in sifting edited cells from a solution containing millions. Conventionally, researchers insert small bits of foreign DNA to make edited cells stick out, but that’s not an option for Tropic. “Once you’re using a selection marker, it’s regarded as a GMO, you’ve introduced foreign DNA,” says Meir. At Tropic, Meir says he is developing tools so he won’t need to trawl through hundreds of thousands of cells looking for an edited handful. And crucially, he says, this technique doesn’t involve the use of any extraneous DNA at all.

Two Israeli companies, Evogene and Rahan Meristem, are using a similar approach to tackle Black Sigatoka – a fungal banana-leaf infection that can halve the amount of fruit a plant produces. As the joint trial enters its third year of field tests, the companies are hoping the end product won’t be classified as a GMO, making it quicker and cheaper to bring to market. “Hopefully, public acceptance will be there, and the cost to develop an improvement won’t be crazy like it was [with] GMO,” says Ofer Haviv, Evogene’s CEO.

But on July 25, 2018, Europe’s highest court threw the future of CRISPR-edited bananas into doubt. After being asked in 2016 by the French government to clarify how a 15-year-old directive on genetically-modified crops applied to ones created using modern gene-editing techniques, the European Court of Justice ruled that CRISPR-edited crops would not be exempt from existing regulations limiting the cultivation and sale of GM organisms. In the eyes of the EU, there was not much difference between Dale’s transgenic bananas and a CRISPR-edited banana after all.

“Disappointed,” says Johnathan Napier, a plant biotechnologist at Rothamsted Research in Hertfordshire, of the EJC ruling. “I’m disappointed for plant sciences and agriculture research in Europe. I’m disappointed for the innovators and the people trying to actually do good. I think it’s going to be really, really tough for them now to use this technology in Europe.”

The day after the ruling, I revisit Tropic. In the boardroom, Gershon is mulling over the ECJ’s decision. “I think this could have been handled better,” he says. Later, as Tropic’s researchers unwrap their lunches, the conversation circles around the idiosyncrasies of regulators’ thinking. Bombarding seeds with radiation to engineer new crop varieties falls outside of the EU’s GMO rules, they point out, but CRISPR – touted as a more precise way of inducing changes in a plant’s genome – doesn’t. But Gershon is undeterred. Europe is only one market, he says, and the US has already proven itself much more accepting of CRISPR-edited food. By 2050, half of the world’s population are projected to live in the tropics, and it is there that people will really need help to produce more food from the same amount of land. In rural parts of Uganda, Rwanda and Cameroon, bananas can provide up to 25 per cent of people’s average daily calorie intake. “Today there is real necessity, but it’s not spread uniformly,” he says.

Those of us outside of the tropics are walking into a culinary cul-de-sac of our own creation. “We got used to having an endless supply of this really cheap food,” Gershon says. “This economic reality will come to an end. We need to find good solutions in order to keep having people eating this fantastically healthy fruit.” Faced with choosing between giving up bananas altogether or accepting bananas that have been given an evolutionary leg-up in the lab, we might have to rethink our attitude to buying gene-edited fruit.

After more than a month with no rain, Norwich’s driest June since 1962, the grass in the research park is almost completely yellow. But dotted among the parched blades, Meir points out tiny patches of green. Plants that, because of an entirely random mutation in their genome, are able to keep growing, even when they’re starved of water. The Cavendish is not so lucky. Thanks to its sterility, it will never pick up a useful mutation through breeding. Yet, for all its flaws, this is the one banana out of the thousands of varieties out there that we have chosen to grow at such a vast scale. And now, as scientists race to find a way to save it that will please consumers, regulators and the food industry, it is facing the fight of its life. “TR4 is happening,” Gershon says. “It’s just a question of time.”

Microsoft Genomics ventures into the microbiome with Eagle Genomics

Crescendo Biologics Strengthens its Management with the Appointment of Dr...