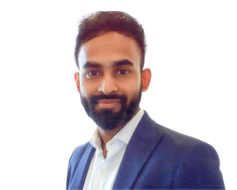 Hassan developed his scientific skills and knowledge at Durham, primarily in molecular biology and fusion proteins. He has also worked at the birthplace of the CRISPR-Cas9 technology, Vienna Biocenter, looking at the role of transcription factors in stem cell differentiation during early embryonic development.

He is responsible for screening new investment opportunities, completing initial diligence for promising opportunities, and portfolio support and monitoring, with a specific focus on synthetic biology investments.

Hassan developed his interest in startups while working as one of the first employees for a leading start-up based in Newcastle. He has also founded a startup, Scientistt, which is a networking platform for the scientific community. Prior to joining Midven and UKI2S, he worked as a start-up scout for Ada Ventures, which is an early-stage tech startup investor.