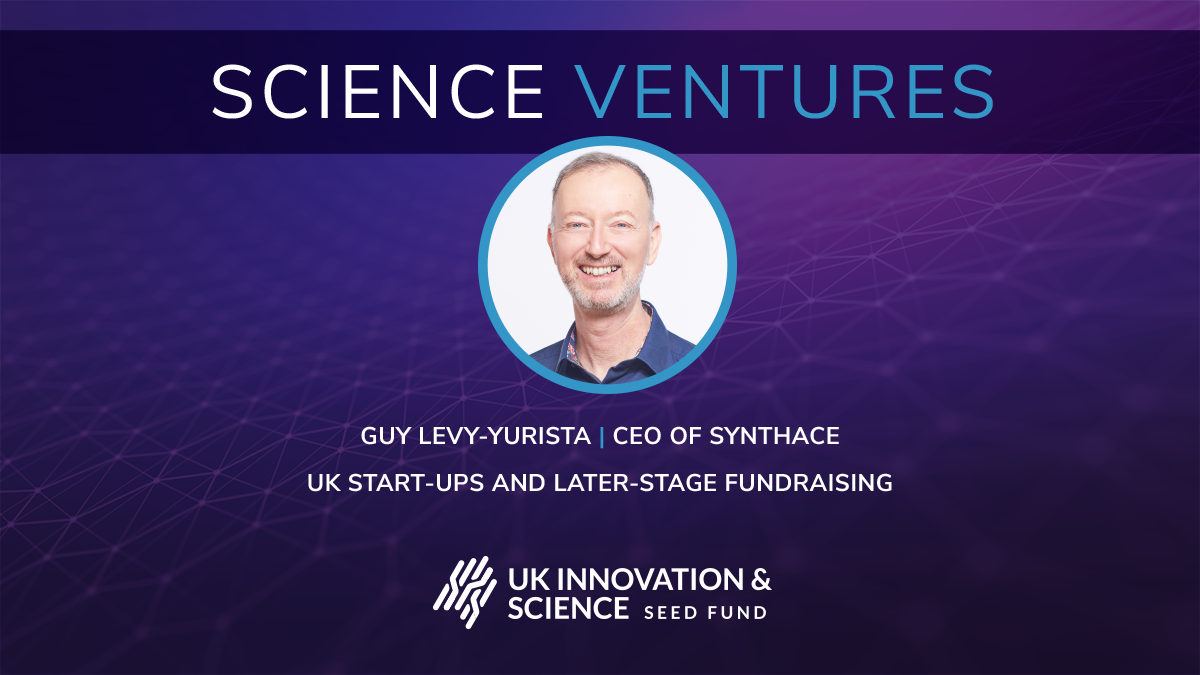 Insights from Guy Levy-Yurista, PhD – CEO of Synthace. About Guy:

What is the most important aspect in later stage funding?

Demonstrating product-market fit and associated exponential commercial growth is a critical aspect in the later stages of company investment. At the beginning during seed and Series A, it’s about having a great idea and a leadership style that is convincing for angel investors and early-stage VCs.

When you get to series B or C level, you need to be establishing a strong product-market fit and demonstrating accelerating growth. Many companies don’t pass those initial stages.

At Synthace, after several years being a Contract Research Organization (CRO), we pivoted into a software company. We saw traction and found the beginning of a true product-market fit. When the product becomes more established, people are willing to pay more, and the flywheel starts to turn faster and faster.

How do you demonstrate product-market fit to VCs?

First and foremost – paying customers and growing revenue. You also want to continuously measure the level of satisfaction of your customers and demonstrate that they like the product and are engaged with it. Our current net promoter score (NPS) is 63, which is world class – our customers simply love us!

For SaaS companies you should also show improvements in your net retention rate – how many of your customers you retain and expand year on year, as well as the constant reductions in your gross churn rate – customers not renewing. Successful SaaS companies need to show exponential revenue growth and a trajectory to an explosive business.  This is the company profile that is attractive to investors. Synthace has constantly shown such exponential growth YoY and so became a very attractive investment target for the best VCs globally.

What is one of the most important things you’ve learned from fundraising?

Talk to the right investors in the right stage and at the right time.

For example, early-stage investors such as UKI2S realise the level of risk they’re taking and could be more amenable to the roller coaster ride of a start-up. You also want the investors to understand what you’re doing and the markets you are operating in so money can be deployed in the right way. Start raising much earlier than when you think you’d need the money. Essentially, as a CEO I am in constant discussions with investors towards my next round.

What would be your most crucial advice for entrepreneurs in later-stage fundraising?

It’s all about your people. Make sure you have the right team on hand and the right culture surrounding them. As you transition to later stages, your team transition as well from generalists to specialists and having the right people on board will allow you to bring in the results you will need to get later stage investors interested. Good luck!

Why did your series C investors back Synthace?

The UKI2S portfolio attracts a very broad range of later stage investors. Synthace’s recent series C was co-led by Horizon Ventures and Sofinnova Partners. Both funds invest globally, and Guy asked Horizon Ventures what drove its choice. The fund commented that ‘Synthace offers a transformational Computer-Aided Design approach that could revolutionise how the industry conducts experiments.’

The investment was based on Synthace’s ambition. Horizon added, ‘this audacious idea resonates well with Horizons Ventures’ overarching vision – to identify and support disruptive technologies that dare to challenge the norm globally.’ Interestingly, the fund noted the success of UK entities and made the observation that ‘some of the most disruptive technologies Horizons has backed are rooted in the UK, such as DeepMind, Owlstone Medical, and Improbable.’

Steve Bennington, CEO of Q5D, speaks to UKI2S about his journey in science ventures...

A year of global challenges emphasises the role of science and technology in our...