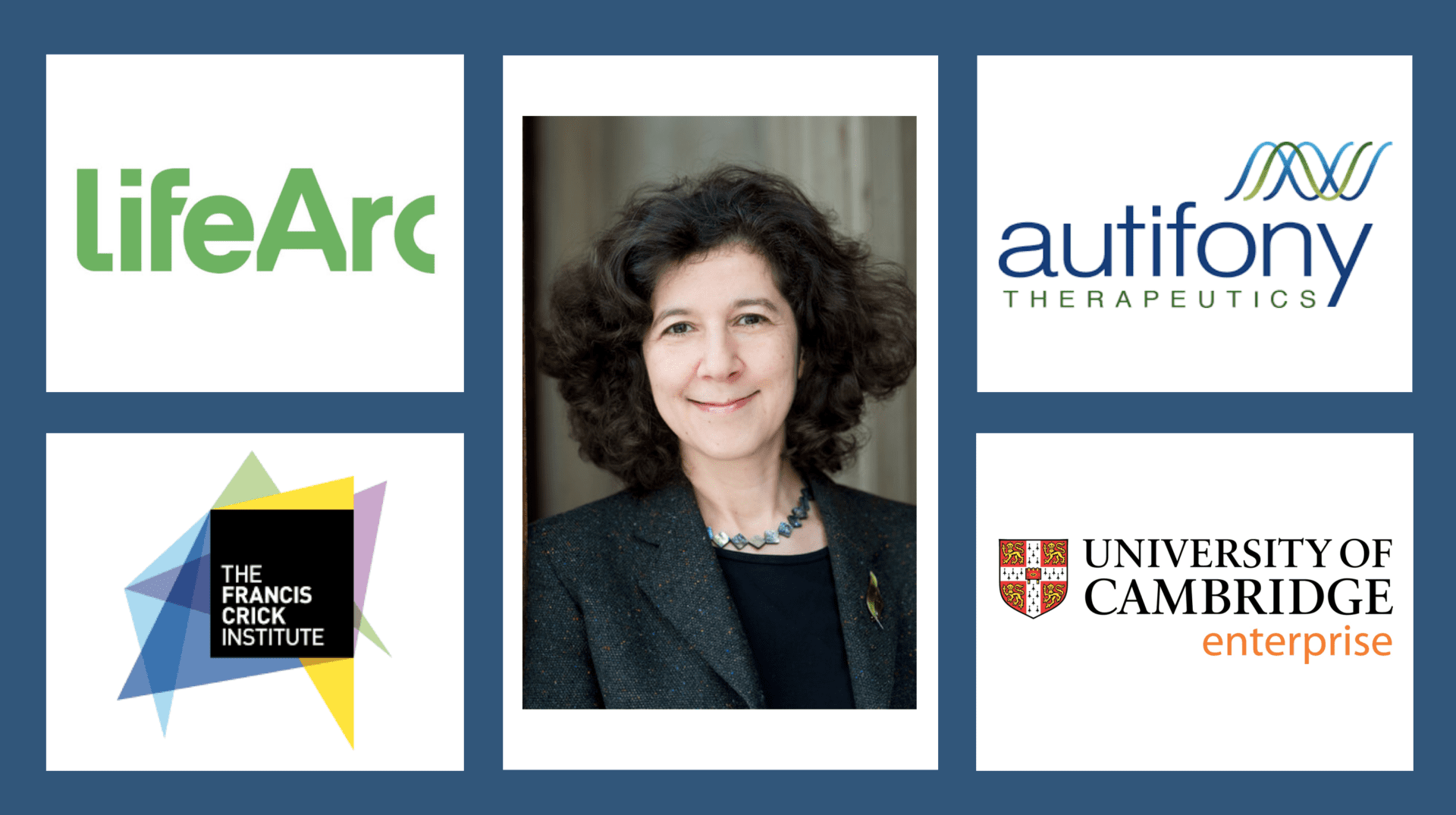 Barbara Domayne-Hayman is an expert in supporting early stage companies in the UK life sciences industry, both as an entrepreneur and now also on the investment side. She has worked extensively in therapeutics and platform technology companies, and more recently in data driven health.

Here, Barbara shares some of the insights she has gained from her experience in helping companies get off the ground:

The CEO of a start-up will constantly be oscillating between the strategic issues that are critical to ensuring long term success and the short-term urgencies that are crucial for the company’s day-to-day operations and even its survival. On a daily basis, the key is constant prioritisation and re-prioritisation. The urgent things have to get done, but it is crucial not to lose track of the bigger picture, which is essential to keeping momentum moving in the right direction.

Start with the end in mind

This is true at many levels. It’s very useful to start with a clear idea of the potential exit routes for your company, and this will be important in selling the proposition to investors. For example, at Puridify, we always knew that there were several major bioprocessing / tools companies who would be interested in buying the company, so we developed a clear and multi-faceted campaign to achieve this from an early stage.

Similarly, for a therapeutics company, it’s helpful to start with an idea of a target product profile (TPP) for the product you aim to develop. In the shorter term, it’s essential to have a clear view of your route to clinical trials, the patient population you want to target and the biomarkers you’ll include in those first human studies. Evidence of discussions with good clinicians is critical from early on – this is something that investors now expect, even in very early stage companies.

One of the hardest things for a start-up to decide is the degree of focus. With limited resources (mainly the team’s time), and insufficient focus, you risk spreading yourselves too thinly and achieving little. If you focus on only one area, you may not pick the right one, depending on what is your basic technology, so your risk of failure increases. This can be an area where the company and investor interests may not align perfectly – generally investors diversify their risk through their portfolio, so they tend to prefer a high degree of focus in a start-up. The start-up’s management are clearly aligned in wanting success, but also have a greater interest in ensuring the survival of the company, so may want to run more projects in parallel. Usually the best route is a high degree of focus, but with some risk mitigation in terms of having a Plan B ongoing, just in case things don’t go as expected, but this is one of the most important decisions a company will take.

Human resources in the widest sense

It almost goes without saying that the team is as important as the technology in an early stage investment. There must be good chemistry between the founders and then each subsequent person added to a small team changes the dynamics, so it is critical to make the right hiring decisions. In addition to direct team members, it’s crucial to involve the best possible professional advisers and consultants, whether formal or informal, and to put effort into building positive relationships with these people. You want them to feel motivated to write those vital introductory emails or to put your work to the front of the queue when it matters.

Protecting your idea is critical to obtaining investment and to beating the competition in the longer term. It’s important to find patent attorneys who understand what you are trying to achieve as a company, and who will help you develop an IP strategy overall rather than simply taking a transactional approach and filing a patent to protect each piece of technology.

Funding, don’t underestimate how much time it will take

Raising funds will occupy much of any early stage company CEO’s time. Using your network of contacts is the most effective approach, as a ‘warm referral’ is often the only way to get an investor’s attention – they are bombarded with hundreds of great proposals from people they don’t know, so a personal referral represents some form of screening or validation. Get out on the conference circuit, choosing the events carefully as your time is your most limited resource, and meet as many relevant people as you can using a carefully practised elevator pitch. Make sure that you are asking for sufficient funds as things always take longer and cost more than you estimate. Don’t forget to add at least 6 months additional runway. You will need to raise sufficient funds to reach a real value inflection point – something that investors will agree significantly de-risks the company – and then six months further funding to allow time to raise the next funding round. Investors always know when you are running low on cash, and that is not the best time to strike a good deal.

It’s also advisable to go for non-dilutive funding, especially in the early stages. Innovate UK is a great source, and investors can then provide ‘match’ funding which enables them to leverage their money. Funding from relevant charities may also be available. However, don’t get distracted writing grant applications for areas that are non-core for the company unless there are compelling reasons.

Corporate collaborations can also be a good source of funding, as well as providing excellent validation. It is always difficult to know how early to engage with corporates, as going in ‘too early’ can simply result in rejection. The likelihood of success strongly depends on how you frame the conversation. A good way to start the interaction with a major corporate is:

“We know we are very early stage but would greatly value your feedback on our plans which are […..]. If we were to come back with the following package of data, would you find it compelling, or can you suggest any improvements?”

This framing creates the opportunity to start building a relationship with the major company, who will also be able to judge your capabilities on execution if you have delivered what you set out to achieve by the time you next meet them a few months later. Remember to be patient – doing deals with major pharma companies takes time.

One of the most important things I have learned about working as an entrepreneur in the biotech field is that building a successful company is a team effort, combining people with different, complementary skillsets. Not everyone has to be the brilliant inventor scientist, nor the visionary commercial CEO, rather it is all about getting a group of highly motivated people together to create an exciting business, with the long-term goal of benefitting patients.

What all start-up CEOs really need is great resilience and a thick skin to cope with the seemingly endless knock-backs. But don’t be discouraged – it is immensely fulfilling (and hopefully rewarding financially too) when things work out.

About Barbara Domayne-Hayman
Barbara is a chemist by training, but after her doctorate decided to go into Marketing and worked for ICI (which later became AstraZeneca) in various international roles for over 10 years, including four years in Central and Eastern Europe soon after the fall of the Berlin Wall where she greatly enjoyed building businesses against a background of extreme change.

Then, doing the Sloan Fellowship programme at London Business School, she discovered the world of entrepreneurship, and found that she could combine her science background and marketing experience to build businesses in the biotech sector. Since 2001, after an initial period at Celltech, Barbara has worked in a wide variety of start-ups and some more mature biotech companies in different roles. For example, she worked as Commercial Director at Arrow Therapeutics, a company discovering and developing new anti-viral drugs, which was sold to AstraZeneca; as CEO of Stabilitech, a company with vaccine stabilisation technology; and as Chair of Puridify, a company with a novel manufacturing technology for biological drugs, which was acquired by GE.

Barbara has spent much of her career fundraising or building relationships with large corporations, either to license technology or for them to acquire the company. For the last few years, she has had a ‘portfolio career’ combining multiple roles. She is currently Chief Business Officer of Autifony Therapeutics, a company developing new treatments for schizophrenia, dementia and other serious central nervous system disorders. Since early 2018, she has been working at the Francis Crick Institute as Entrepreneur-in-Residence, where as well as mentoring scientists taking their first steps in ‘translating’ their science from the lab to having real world impact, she also helps to run an accelerator (KQ Labs) at the Crick for start-ups in the emerging interface between data and biomedical sciences. She recently ran a Summer School in this area for PhDs and postdocs across the UK wanting to learn more about entrepreneurship, and also runs the PULSE programme jointly with the Bioindustry Association (Programme for Up and Coming Life Science Entrepreneurs), which is a three day bootcamp for first time CEOs and founders.

Barbara is on the investment committee of the Cambridge Enterprise Seed Investment fund and chairs the LifeArc Seed Fund investment committee, which enables her to see many fascinating early stage opportunities.  She also spends time mentoring and helping aspiring entrepreneurs aiming to build science-based businesses.

Corporate communications in the COVID-19 crisis

Key challenges faced and solutions implemented when spinning out a company Starting a company...